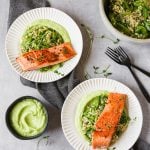 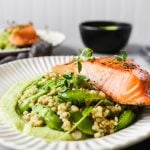 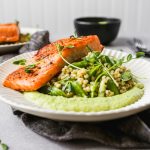 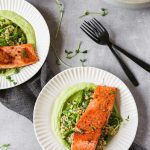 Make the perfect pan seared salmon with this simple, yet surprising, recipe. Then serve it with a flavorful leek purée and a healthful sorghum pilaf for a fresh, healthy dinner.

It’s been crazy around our house lately. For the past month or so it seems G and I have been swept up in self-induced whirlwinds, spinning in opposite directions, with our paths crossing just every once in a while. The silver lining?

I’ve been cooking up a storm lately, which has included this perfect Pan Seared Salmon. Yes, I know it sounds egotistical, but this crispy pan seared salmon is just about as close to perfection as salmon comes. And I promise I don’t say that lightly.

Why this is so good

What makes this pan seared salmon so delicious is due to two things. One, it’s brined. Yes you can brine salmon. And two, a dry nonstick skillet.

So first off, brining salmon. It feels counterintuitive doesn’t it? Thanks to its tender, fatty flesh you wouldn’t think it would benefit from brining. But it most definitely does. The key is that you only brine for a short amount of time to impart flavor and to keep it nice and moist while cooking.

Then the secret to achieving a super crispy sear on salmon lies in a dry nonstick skillet. The fat released from the salmon itself during cooking is all it needs to crisp up, no added fat is necessary. And, heating the pan and salmon up at the same time gradually cooks the salmon while ensuring a crispy sear on both sides.

This pan seared salmon definitely shines on its own, but since it’s spring, I couldn’t help myself. A super simple leek purée adds a vibrant, fresh note to the plate, while a sorghum pilaf rounds out the meal.

Made with spring veggies and whole-grain sorghum, this pilaf stands on its own and would be a great base for quick meals throughout the week (meal prep!). Not into sorghum? Use any hearty grain of choice like farro, barley, or wheat berries.

Make the perfect seared salmon with this simple, yet surprising, recipe. Then serve it with a flavorful leek purée and a healthful sorghum pilaf for a fresh, healthy dinner.

For the leek purée:

Heat 1 tablespoon oil in a saucepan over medium, add onions and cook until translucent, 6 minutes. Add garlic and cook 30 seconds; season with salt and pepper. Stir in sorghum and cook 1 minute. Add broth, bring to a boil, reduce to a simmer, cover, and cook until sorghum is tender, 35–40 minutes; drain if needed.

If using a different grain, cook according to package directions.

For the leek purée:

Meanwhile, for the leek purée, bring a saucepan of salted water to a boil. Add leeks, and cook until very tender, about 5 minutes. Drain leeks and transfer to a blender or food processor with butter and purée; season with salt and pepper. Transfer leek purée back to saucepan and keep warm.

Transfer salmon fillets to a paper-towel-lined plate and pat dry. Combine 1 teaspoon each salt and pepper. Sprinkle half of salt and pepper mixture in bottom of a large nonstick skillet. Arrange fillets, skin side down, in skillet; heat to medium high and sprinkle with remaining salt and pepper over top.

For the pilaf: if you aren’t crazy about tarragon, start with 1 tablespoon, or use mint instead.

How to wash leeks: A lot of dirt gets trapped between the layers in leeks, so it’s incredibly important to clean leeks before cooking with them. To clean them, first trim off the dark green parts of the leek, starting at the point where the leaves fan out. Trim the root end, slice the leek in half, lengthwise, then slice crosswise. Transfer the sliced leeks to a large bowl. Run cold water over the leeks until leeks are submerged. Let leeks soak for 5 minutes, then gently lift leeks out of the water (trying not to disturb the water much) and transfer to a bowl; discard water. Repeat soaking and draining once more.

For the best texture and flavor, only brine the salmon for 15–20 minutes. Any longer and the texture of the fish can be impacted. This genius trick was created by the folks at America’s Test Kitchen, you know I love them.