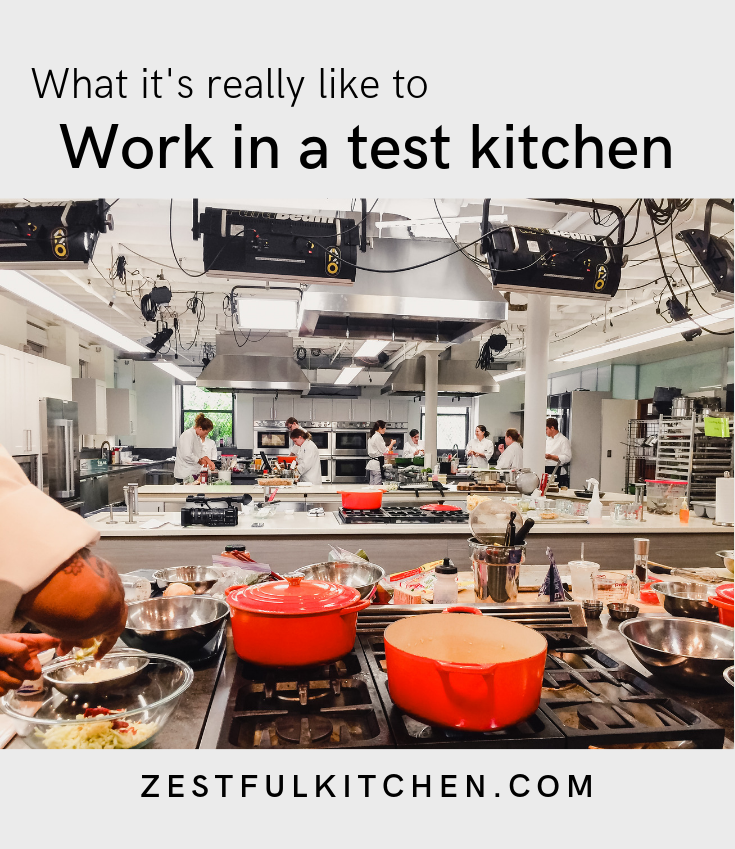 Imagine eating salmon burgers at 9am, chocolate cake at 10am, sipping a cucumber mojito at 10:30am, Couch Potato Soup at 11:30am, gnocchi at 1:00pm, and aebleskiver at 3pm.

Grazing during meal time and Tums become a regular part of life. And while everyone I know looks forward to indulging on the weekends, I look forward to eating healthy meals at normal times on my days off.

Welcome to working in a test kitchen. 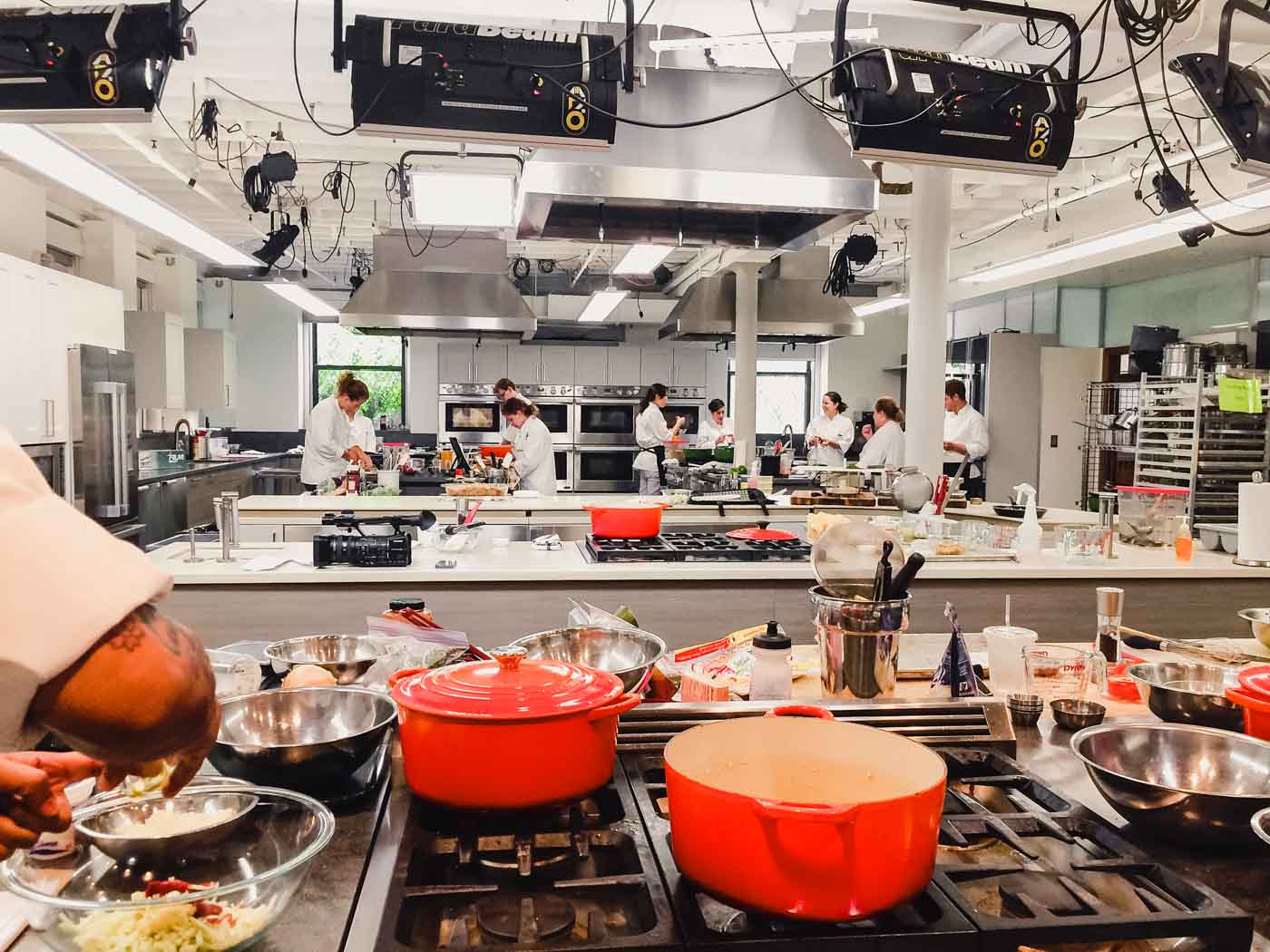 While some people think it sounds dreamy to eat, cook, write, eat, cook write, repeat, it can have its challenges. Most notably being stomach aches. But that’s beside the point.

Working in a test kitchen is somewhat of a mysterious career. It’s challenging, creative, bizarre, and fun. No matter how long you’ve been developing recipes, there’s always a new rule to write (or break), flops to create and something to learn. One of the biggest reasons I love working in test kitchens is that I’m always discovering new things. It’s as if I’m a forever-student and I love the idea of that!

I’ve worked in a variety of professional test kitchens, each drastically different than the other. And while they’re all so different, there are a few consistencies that run throughout, let’s dive in to those.

What is a Test Kitchen?

Before we chat about the ins and outs of test kitchens let’s first define what a test kitchen is! A general overview: a test kitchen is a kitchen most often equipped with multiple cooking stations where test cooks and chefs research, test and develop recipes for home cooks. Recipes are often testing multiple times and critiqued by many people.

The Level of Testing

The recipes that come from test kitchens undergo grueling testing (at least they should), which is what sets them apart from other recipe sources. Like with anything, not all test kitchens are created equal. But that’s a whole other article.

When I first started my internship at America’s Test Kitchen there was a corn muffin recipe that was in its 45th test. The recipe was still being developed and tested by the end of my internship three months later. That’s what makes recipes from test kitchens so reliable. Now I will say, that amount of testing isn’t industry standard. On average a reputable test kitchen tests a recipe anywhere between eight and ten times. But again, it varies depending on the test kitchen.

The most notable difference between America’s Test Kitchen and other test kitchens is that they test the many nuances of recipes. A recipe could, in essence, pass taste panel (be delicious, turn out perfectly every time, etc.) but the amount of lemon zest could maybe use a bit of tweaking. Or the vinegar might need to be added five minutes later in the cooking process. The tests can go on and on, but that’s what makes ATK so different than other test kitchens. They test and create recipes that are scientifically proven to work and, I’m going to say it, are perfect.

Check out some of my favorite recipes from ATK! 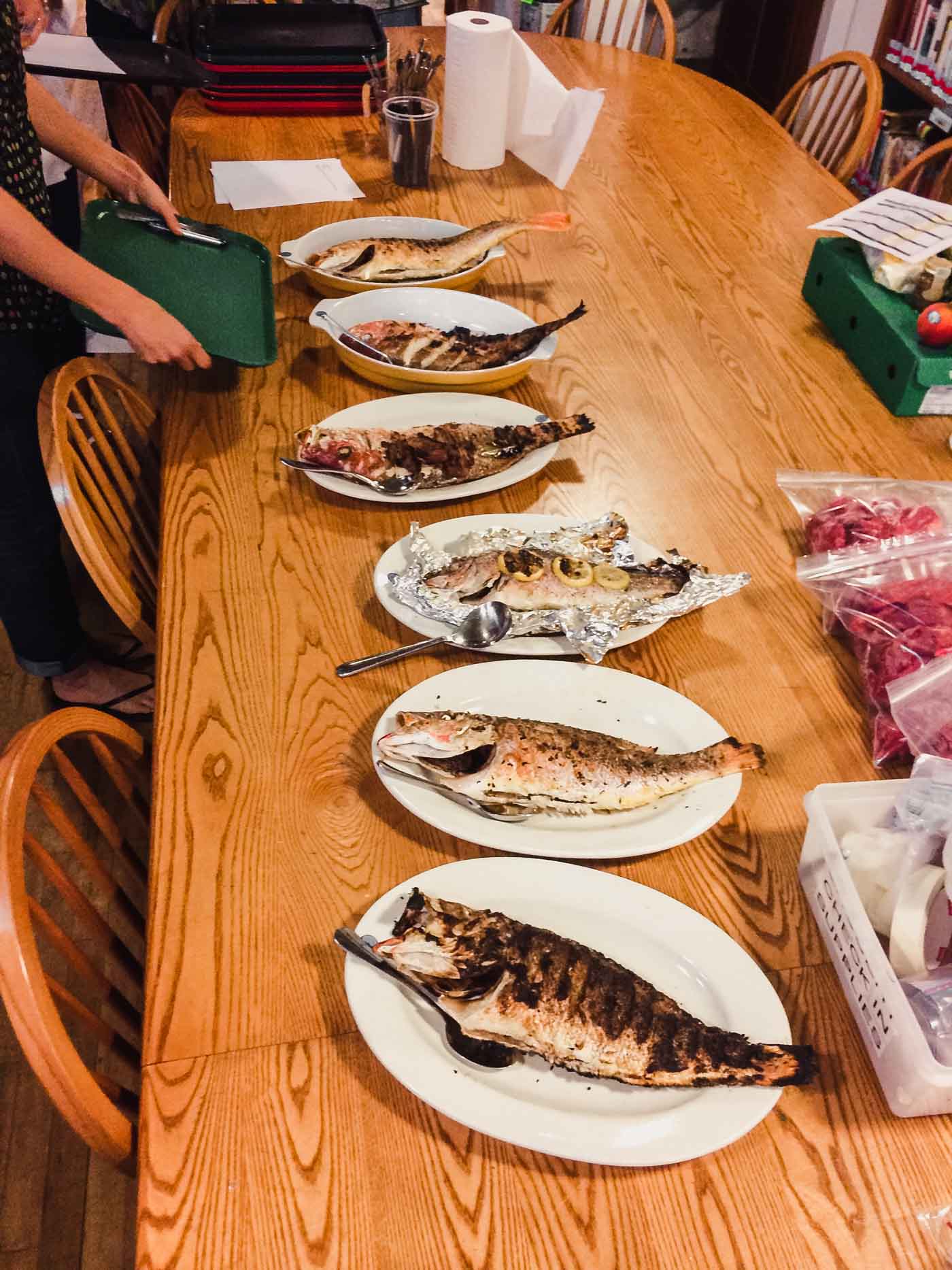 All test kitchens have something called “taste panel” where recipes are vetted, analyzed and rated by multiple people, both professional cooks and, for lack of a better term, regular people.

The structure and process of taste panels can look very different depending on the test kitchen.

BH&G taste panels are comparable to a sit-down meal. The BH&G Test Kitchen develops for multiple publications, so to streamline the taste panel process they usually hold designated taste panels for specific publications consisting of three to eight recipes at a time.

The BH&G test kitchen develops a lot of recipes for health-focused or -related publications, so serving size and nutrition is a big part of their development process. Whereas places like ATK, Bon Appetit, Fine Cooking and Cuisine at Home are less focused on that.

ATK taste panels range in structure depending on the publication, editor and recipe/product. Sometimes taste panels are held at their long wooden table in the library (they’ve moved locations since I was there, so this could have changed) while others are held right in the test kitchen with your editor and team gathered around your station. They also hold blind taste panels as well as silent taste panels with voting ballets.

As for Cuisine, it’s somewhat of a hybrid between the two. Everyone who’s available gathers around the big butcher block in the center of the kitchen, the recipe is presented, preliminary photos are snapped for reference, the how’s and why’s are laid out, and then it’s divided and critiqued between ten people.

Each test kitchen I have worked in has individual work stations for test cooks. Some kitchens have assigned stations (Cuisine and BH&G) which means you have a full-fledged, outfitted kitchen with a stove, oven, sink and refrigerator.

The benefit of having an assigned kitchen station is that you can organize your equipment however you like and know it will be the same way every day.

Other kitchens have stations that are first come first serve (ATK) where you stake claim on some counter space and a sink for the day. You also have an assigned refrigerator somewhere in the test kitchen and ovens are up for grabs as needed.

It was always a challenge to get a good station at ATK because people would come in early to claim their station—understandably so, you are cooking 8–5 after all.  The beauty of floating stations is that you start over every morning gathering the equipment you’ll need for the day, which ends up cutting down on clutter.

There are definite pros and cons to both.

This is a production! No matter the size of the test kitchen, getting groceries ordered and/or picked up is a huge part of a test kitchen running smoothly. Most test kitchens have a designated employee who orders the groceries and/or picks them up. Test cooks are responsible for sending their grocery lists to the shopper a day in advance so they can organize the list and/or track down any specialty items that may be harder to find.

Smaller test kitchens, like Cuisine at Home, have one person who personally shops for all of the groceries early in the morning and often has to stop by multiple grocery stores to get everything on the master list. Most days at Cuisine we would have our groceries for testing by 8 or 8:30am.

Larger organizations like ATK have a much bigger and intense grocery list. For the interest of time, ATK sends grocery lists out to a variety of grocers to have them delivered first thing in the morning. On occasion the employee in charge of ordering the master list, or an intern, will need to run out for specialty items.

With 50+ test cooks the grocery haul is big! Once delivered, the groceries have to go somewhere. As an intern at ATK the first portion of my day was devoted to separating and weighing out produce, labeling and preparing herbs for optimal storage, and delivering groceries to the designated test cooks’ refrigerators and dry racks. 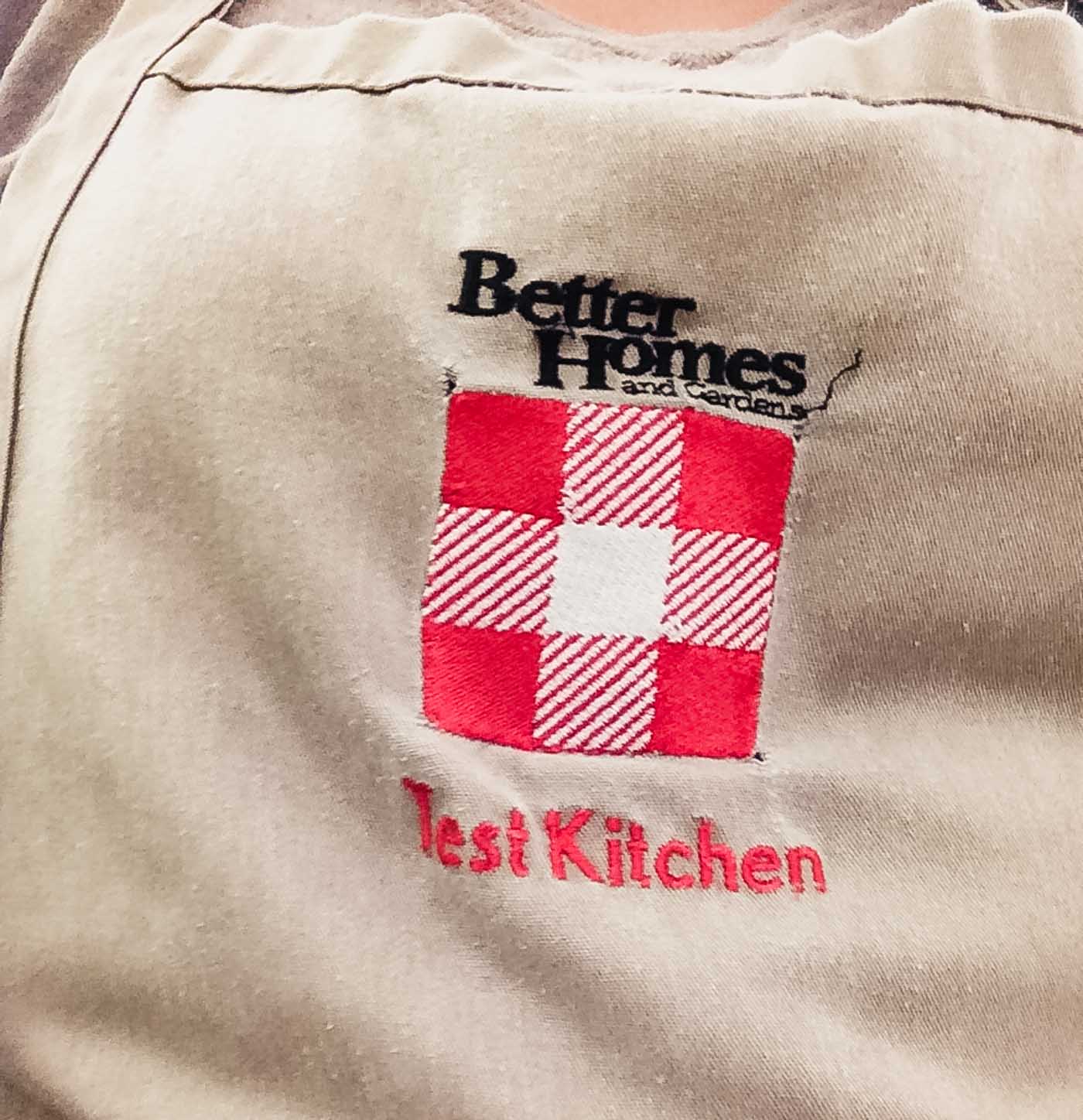 Do Test Kitchens Have Dishwashers?

Depends on what you mean by dishwasher. ATK has a few dishwashers on staff and it’s heaven on earth. They have a restaurant-sized dishwashing station so there’s never a shortage of bowls or equipment.

This is just part one of four, keep an eye out for more test kitchen articles including how to develop a recipe, how to write a recipe, essential cookbooks every recipe developer needs, and how to outfit a test kitchen pantry. 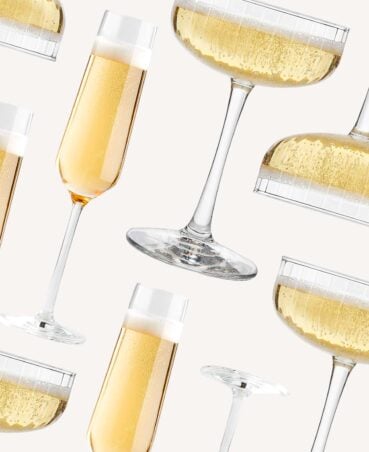 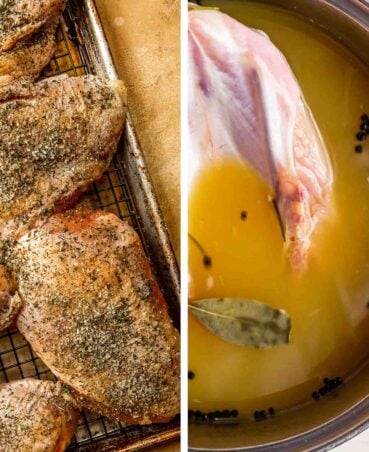 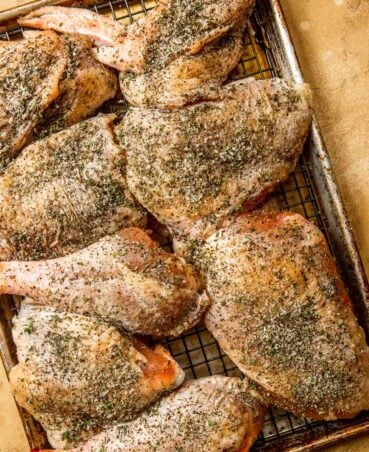 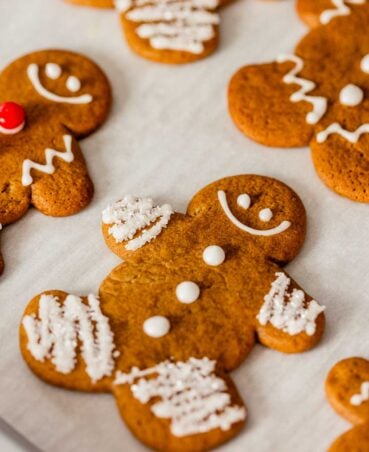