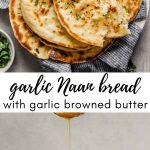 Not sure naan bread could get any better? Try this garlic naan recipe and I guarantee you’ll be surprised! It’s soft and chewy like classic naan, but has an added boost of caramelized flavor from fresh minced garlic. Right before serving the naan then gets brushed with a garlic brown butter for a savory, nutty finish.

The process of making garlic naan bread is simple, there is some rising time so a bit of patience is all you need.

If you aren’t into the three-step rising process you can make the dough ahead of time and do a slow rise in the refrigerator—simple and hands-off! Look for make-ahead instructions in the notes section of the recipe card.

One of the most important things when making naan is to use fresh yeast—check the expiration date, if it’s expired you run the risk of your dough not rising. Better safe than sorry, so grab yourself a new packet at the store (you can find it in the baking aisle next to the flour).

What do you need for this garlic naan recipe?

How to make garlic naan?

Can you freeze naan?

If you have leftover naan (rare, but possible) it’s a great idea to freeze it and save for later. Layer naan bread between layers of wax or parchment paper. Transfer to a resealable freezer bag

and freeze. Naan bread can be frozen for up to 3 months.

Many recipes will tell you to reheat naan bread in the oven. However, I’ve found this dries out the naan—which in my opinion defeats the purpose of naan! This method of reheating can be used for naan that’s been stored in the refrigerator or freezer.

The best way to reheat naan is to first warm the naan bread in the microwave. Wrap the naan in moist paper towels and microwave on high for 30–90 seconds until the bread is soft, pliable, and steaming. (Naan that’s been stored in the refrigerator will only need about 30 seconds in the microwave, while frozen will need a bit longer, closer to 90 seconds.)

From the microwave, drop the naan bread into a hot cast-iron skillet

over medium-high heat. Cook the naan just until charred, lightly crisp and warmed through, 30 seconds per side.

What to serve with garlic naan?

How to use garlic naan?

Make sure to tag me @ZESTFULKITCHEN ON INSTAGRAM or comment below if you make this garlic naan!

Soft and chewy, this garlic naan recipe is easy to make, delicious, and WAY better than store-bough naan. Serve as a side or use it to make sandwiches, pizzas, and flatbreads.

Process flour and yeast in a food processor to combine. With processor running, slowly stream in water mixture until just combined and no dry flour remains, about 10 seconds. Let dough rest 10 minutes.

Add 1 teaspoon salt to dough and process until a satiny, sticky dough ball forms and clears the sides of the bowl, about 60 seconds.

Transfer dough to a lightly floured surface and knead until smooth, 1 minute. Shape dough into a tight ball and place in a large, lightly oiled bowl. Cover tightly with plastic wrap and let rise at room temperature for 30 minutes.

After 30 minutes, fold partially risen dough over itself 8 times by gently lifting and folding edge of dough toward middle, rotating bowl 90-degrees after each fold. Cover with plastic wrap and let rise 30 minutes more. Repeat folding, then cover tightly and let rise one last time for 30 minutes.

Preheat oven to 200°F with a baking sheet set inside.

Transfer 1 dough ball to lightly floured surface and sprinkle with flour. Roll piece of dough into an 8–8½-inch round of even thickness, sprinkling with more flour as needed. Sprinkle ¾ teaspoon minced garlic over the surface of dough; gently press into dough. Using a fork, poke surface of dough 30 times.

Heat 1 teaspoon oil in a cast-iron skillet over medium until shimmering, wipe oil out of skillet with a paper towel.

Transfer naan to baking sheet in oven to keep warm.

Repeat rolling and cooking with remaining dough and oil.

Heat butter in a small saucepan over medium heat. Cook, swirling occasionally, until lightly golden and nutty, 3–5 minutes. Off heat, stir in remaining 1 teaspoon garlic and season with salt and pepper.

If you don’t have time to prep the dough and make it, you can make the dough ahead of time and let it rest overnight: Follow recipe through kneading and placing in large oiled bowl. Cover tightly with plastic wrap and refrigerate for 16–24 hours. Then follow recipe instructions beginning with forming into four equal dough balls.

Welcome to Zestful Kitchen!
I'm Lo, a professionally trained Culinary Food Scientist, Journalist, and previous food magazine editor. I'm all
about cooking healthy-ish—aka healthy recipes that don't sacrifice on flavor. I'm here to help you find confidence in the kitchen and LOVE what you eat.