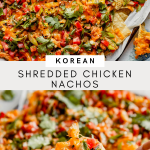 These shredded chicken nachos feature all the classic nacho components just with a Korean flare! This Mexican–Korean fusion nacho recipe is packed with savory flavor, fresh ingredients, and crave-worthy textures.

For this recipe I call for cooked, shredded chicken. You can certainly cook a whole bird, a few breasts, and/or thighs and then shred the meat.

Or, which I recommend, you can make your life easier by picking up a done-for-you rotisserie chicken at the store, effectively cutting most of the work out of this recipe! Also keep in mind—this is a great recipe to use leftover cooked chicken in.

I took the classic nacho topping—pico de gallo—and gave it a Korean makeover with kimchi, scallions, and tomatoes. If you’re new to buying kimchi, look for it in the refrigerated area of the produce or health market section of your grocery store. Often times it’s stocked next to the tofu.

Every great nacho recipe needs a good sauce! For these Korean nachos I whip up a simple sauce made with mayonnaise, soy sauce, gochujang, toasted sesame oil, and a touch of minced fresh garlic. Drizzled over top, this creamy sauce adds a savory, sweet, and slightly spicy flavor.

The ingredient list is simple, but dang it’s got great flavor!

How to make shredded chicken nachos

Nachos are a fun, easy and adaptable dinner/appetizer!

Two of the biggest complaints when it comes to nachos: soggy nachos and naked chips. Let’s tackle both issues.

How to avoid soggy nachos: use a protein that’s not overly juicy (chicken, beans, cooked ground meat that’s been drained). If you’re tossing the meat with a sauce make sure it’s pretty thick, and don’t use too much of it.

It’s also important to consider how you build your nachos. Start by layering the chips with the toppings that are drier and with shredded cheese—once melted, cheese acts as a barrier between the chips and the wet ingredients.

Right before serving, finish the nachos with the toppings that have more moisture. Alas, make sure you eat nachos right after assembling. This is key.

How to avoid naked chips: if you’re a human being on earth you’ve certainly analyzed a tray of nachos and strategically snagged the chip with the perfect ratio of toppings and cheese (also probably the chip with the most toppings). Who can blame you?

But here’s a radical idea—let’s make it so you don’t have to search because every chip is adequately stacked. I find one of two things causes naked chips—either the nacho-maker used too many chips or too small of a pan (or both!).

Here’s the deal, don’t be afraid to leave some chips in the bag! You don’t have to use a whole bag of chips when making nachos. And spread out the chips! Use a sizable pan so your chips can spread out.

Layer the last half of the chips over top followed by the remaining chicken, corn and cheese and broil until the cheese is melted.

With layered nachos you can do one of two things—reserve some of the fresh toppings to sprinkle over top when you’ve gotten down to the bottom layer. Or, you can pile them all on and count on some of the toppings to fall onto the second layer when chips are picked up.

Don’t forget, if you make these shredded chicken nachos, leave a comment and rating below!

Preheat oven to 400ºF (204ºC) with rack set in middle position. Line a baking sheet with parchment paper or coat with nonstick spray.

Heat a cast-iron skillet over medium-high heat. Coat corn with nonstick spray and cook in skillet until charred on all sides, 10 minutes. Transfer corn to a cutting board to cool slightly; cut kernels from cobs.

Mix mayonnaise, soy sauce, gochujang, sesame oil and garlic together for the sauce. In a medium bowl, toss together chicken and ¼ cup of the sauce.

Top chips with corn, chicken mixture, and cheese. Bake until chicken is heated through and cheese is melted, about 6 minutes.

Top nachos with tomato mixture and sprinkle with sesame seeds. Drizzle nachos with additional Gochujang Everything Sauce and serve immediately.

Welcome to Zestful Kitchen!
I'm Lo, a professionally trained Culinary Food Scientist, Journalist, and former food magazine editor. I'm all
about cooking healthy-ish—aka healthy recipes that don't sacrifice on flavor. I'm here to help you find confidence in the kitchen and LOVE what you eat.