Tacos Árabes is one of the most well-known dishes to come out of Puebla, Mexico. These pork tacos are a blending of two cultures—Iraqi and Mexican—and the result is a flavorful taco infused with the flavors of shawarma.

What are Tacos Árabes?

As many of the best dishes in the world, Tacos Árabes are the offspring of a delicious fusion of cultures. We learned in Rick Martinez book, Mi Cocina, that the Tabe and Galeana familes are credited with creating this dish. In the 1920s they emigrated to Puebla, Mexico and with them came their expertise for making shawarma.

The technique of roasting layers of meat and spices on a spinning vertical spit is what makes shawarma, well, shawarma. In Iraq they often used Lamb, but in Mexico they found pork to be much more readily available. In addition to changing the protein they cooked with, they also had to change the herbs and spices used.

The resulting dish tastes a lot like shawarma but served in a Mexican-style yeasted flatbread meant to resemble something between pita bread and flour tortillas.

For starters, most home cooks don’t have a vertical spit set up in their backyard (our test kitchen sure doesn’t). So we needed to find a way to improvise. Our testing leaned heavily on a recipe from the book Mi Cocina by Rick Martinez.

His method marinates thin pork shoulder steaks in a citrusy onion mixture and relies on the ‘ol trusty cast-iron skillet to achieve a lovely char. Once cooked, and rested, the pork is then thinly sliced to resemble shaved shawarma meat.

To emulate a pillowy and chewy yeasted bread, we layered two flour tortillas together before layering the juicy pork.

And finally, we found a few simple toppings—smoky salsa, Greek yogurt, raw onion and cucumber— was all these tacos needed to be a homerun.

In order for the pork to cook through before smoking out your kitchen, you’ll want to use fairly thin boneless pork shoulder steaks. Look for 1/2-inch to 3/4-inch thick steaks. If they’re thicker, we recommend pounding them out a bit.

If you can, try to use Mexican oregano. If not, marjoram or regular oregano can be used.

Other Taco Recipes to Try

We are obsessed with our Chicken Barbacoa recipe. The tender shredded chicken is perfect stuffed into a tortilla with all the fixin’s.

Keeping with the theme of hybridizing dishes, check out our Harissa Lamb Tacos. They’re spicy, bold and totally savory.

Marinated pork tacos inspired by the flavors of Iraqi and Mexican cuisine. Think shawarma meets taco in this flavor-packed meal.

Recipe Notes: Adapted from a recipe by Rick Martinez in his book Mi Cocina. 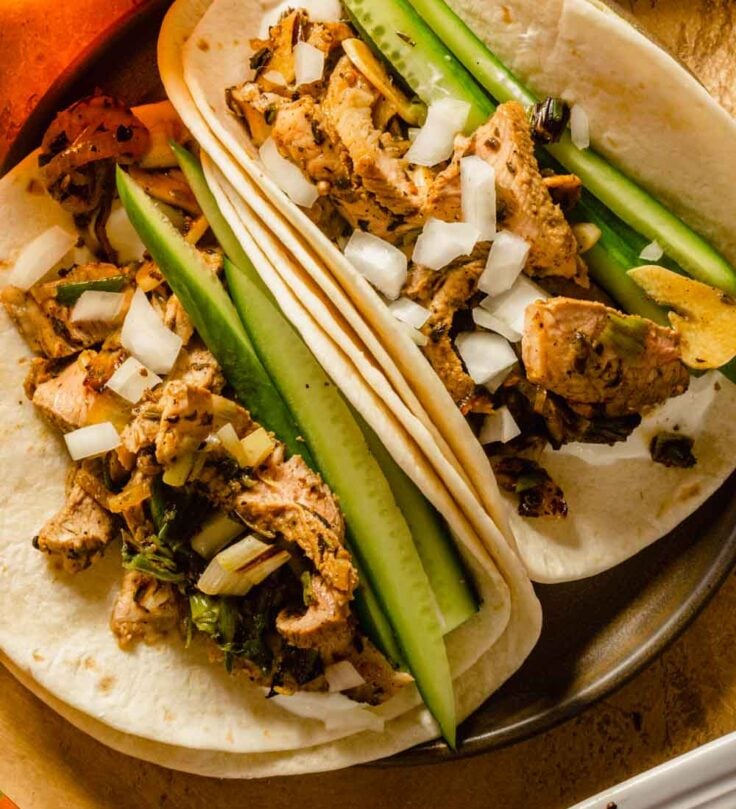 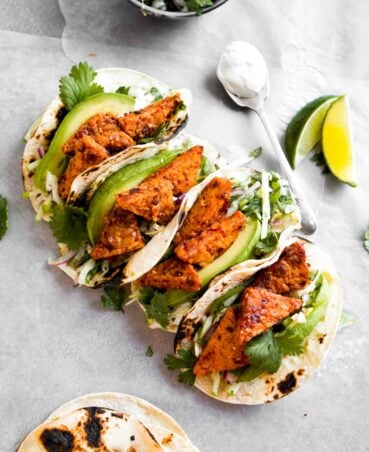 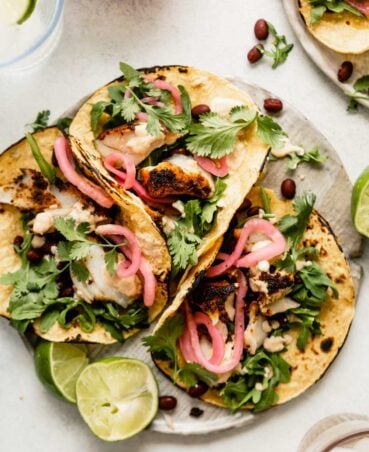