Vegan BBQ Tempeh Sandwiches! BBQ no longer is reserved for the meat-eaters alone. This recipe slow cooks tempeh in homemade barbecue sauce (or your fav bottled sauce) to create tender, caramelized tempeh pieces. The bbq tempeh then gets piled onto whole-wheat buns with a simple vinaigrette-based slaw to create the perfect vegetarian bbq sandwich.

I love these vegan bbq sandwiches! For one, they’re full of flavor from a sweet and spicy Carolina Gold BBQ sauce and a tangy vinaigrette-based slaw. But what I love most about this vegan bbq recipe is that you can make these sandwiches however you like.

If you prefer a creamy slaw, swap out the olive oil in the vinaigrette for vegan mayo

(or classic mayo if you don’t follow a strict vegan diet). Do you like a thick and sticky BBQ sauce? Use that instead of the Carolina Gold sauce. Looking to cut carbs? Serve the BBQ tempeh in lettuce cups with some quinoa.

Tempeh is a soybean cake made by fermenting cooked soybeans and can be used in a variety of applications. It’s one of my favorite plant-based proteins because it’s firm and meaty in texture and slightly nutty in flavor. Plus, since it’s mild in flavor, like tofu, it can be cooked with all kinds of flavors and cuisines.

Because of its texture and meatiness, I like to use tempeh in tacos, salads, and sandwiches, but it’s also great used in fillings, casseroles and more.

Where can I find tempeh?

Tempeh can be found in natural foods stores and most grocery stores or supermarkets.

Tempeh is sold refrigerated, in airtight plastic wrapping, in either the health section or produce section of stores.

How to make vegan BBQ tempeh

There are a few important steps to making BBQ tempeh but, start to finish, the whole process takes just 45 minutes. And the beautiful thing about it all—you don’t have to hang around and babysit anything. Most of this is hands-off!

Before you get started prepping, get your oven heating to 375ºF and line a baking sheet with parchment paper. Then fill a sauté pan with water and set it over medium-high heat.

STEP 1: Cut the tempeh as directed in the recipe, the most important thing here is to cut the tempeh into thin strips. The width isn’t as important as the thickness. For standard tempeh cakes, such as Lightlife, I cut the cake into 1-inch wide strips (they can be wider if you like), then I cut those strips horizontally into ⅛-inch thick slices. If cut thicker, the tempeh won’t absorb the BBQ sauce as well.

STEP 2: The next important step is simmering the tempeh. Since tempeh is sold ready-to-eat, this step may seem unnecessary, but it’s actually quite important for achieving the ideal flavor and texture for bbq tempeh. Simmering both softens the tempeh and it cooks off some of the bitter flavor of tempeh.

STEP 3: Next, drain the tempeh and toss it with bbq sauce and oil. Just a tablespoon of olive oil is all you need here, but it’s important for keeping the tempeh moist. As for the sauce, you can use whatever BBQ sauce you like here, whether you make it yourself or buy it. Just make sure to seek out vegan BBQ sauce if you follow a strict vegan diet.

For this BBQ tempeh, I prefer to use my Carolina Gold BBQ Sauce. Again, if you follow a strict vegan diet, be sure to make the recommended ingredient modifications to keep it 100% vegan  (use coconut sugar or brown sugar instead of honey, and use liquid or coconut aminos instead of Worcestershire).

STEP 5: While the tempeh bakes, whip up the 6-ingredient slaw. Use a big bowl so you can easily and efficiently toss everything together. Make the vinaigrette in the bowl first, then add the cabbage and scallions and toss to combine.

STEP 6: Put it all together and enjoy! Don’t forget to drizzle the bbq tempeh with a bit more BBQ sauce before you place the top bun on the sandwich!

What to serve with these BBQ Tempeh sandwiches

Don’t forget, if you make these vegan BBQ Tempeh Sandwiches, leave a comment and rating below!

Caramelized bbq tempeh gets piled onto whole-wheat buns with a simple vinaigrette-based slaw to create the ultimate vegan bbq sandwich! Try it will my Carolina Gold BBQ sauce or make it with your favorite bottled sauce.

Bring a large sauté pan of water to a boil. Add tempeh pieces, bring water back to a simmer and cook 12 minutes, flipping pieces halfway through. Drain tempeh then transfer to a large bowl with BBQ sauce and oil; toss to coat.

Meanwhile, whisk together remaining 2 tablespoons oil, vinegar, honey (or maple syrup), garlic, salt and pepper in a large bowl. Add cabbage and scallions and toss to combine; season with additional salt and pepper to taste.

Assemble sandwiches with a spoonful or two of slaw, 4–5 slices of tempeh, and a spoonful of BBQ sauce. Enjoy!

Serve leftover BBQ tempeh on salads, in wraps, or even in an omelet.

* HONEY/MAPLE SYRUP: to keep this completely vegan, use maple syrup. If you aren’t super strict, I recommend using honey.

MAKE IT GLUTEN-FREE: use gluten-free burger buns or bread. 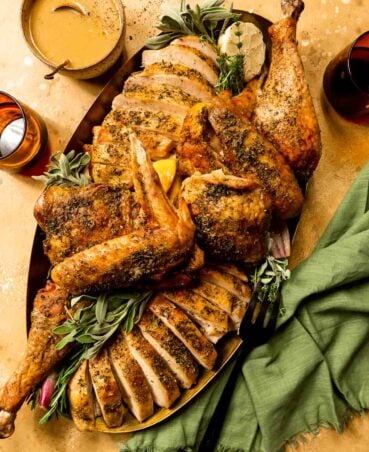 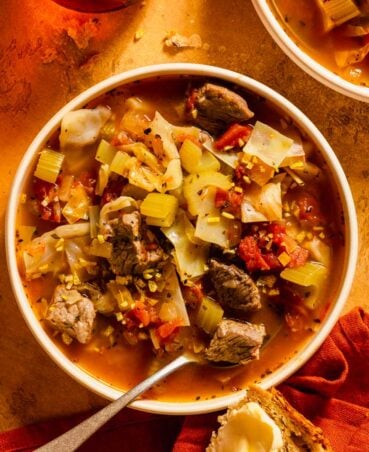 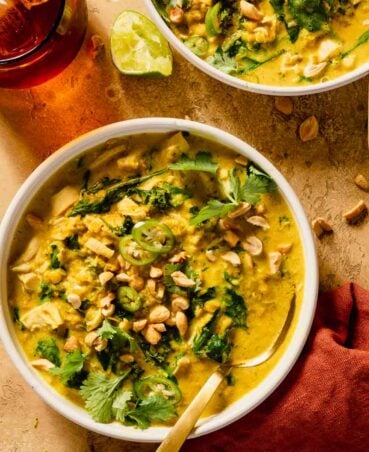 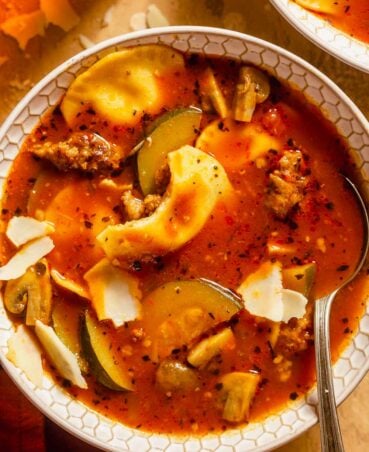